BEST SEASON: October to May

Ajmer is known throughout the Muslim world for the Dargah (the burial place) of Khwaja Moin-ud-din Chishti, a famous Sufi saint. He claimed to descent from the son-in-law of Mohammad. Seven pilgrimages to Ajmer are considered as equivalent to one pilgrimage to Mecca. Thousands of pilgrimages descend on this ancient town during the Islamic festivals of Id and Muharram.

The dargah of Khwaja Moin-ud-din Chishti is located at the foot of a small and barren hill in Ajmer. It is said that Mughal Emperor Humayun built the shrine and the Buland Darwaza, carved in silver, was built by the Nizam of Hyderabad. The tomb of Khwaja is surrounded by a silver railing and there is a separate women’s praying room, said to be built by Chimni Begum – the daughter of Shahjahan.

There are two huge cauldrons in the courtyard of the dargah with a capital of 2,240 kg and 4,480 kg respectively. Kheer (sweet porridge) and Khichri (savoury porridge) are cooked in these cauldrons to be distributed among the devotees. An interesting custom related to the cauldron is the looting of the kheer. Akbar Masjid and Shah Jahan Masjid are also inside the same complex. 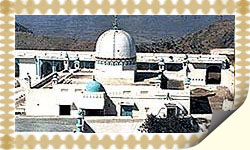 The first hill fort of India was built in 1100 by Ajayapal Chauhan. The fort gives excellent views of the town below and also known as the Star Fort. It has a thickness of four and a half meters and a winding uphill path leads to this rectangular fort. Most of the fort is now in ruins though at the time of its construction, it was supposed to be the invincible fort and so named as Ajai Meru (invincible fort).

Ana Sagar Lake :
This beautiful lake was built by King Anaji (AD 1135-1150), the grandfather of Prithvi Raj Chauhan at a picturesque site located to the north of Ajmer. Daulat Bagh Gardens, which was created by Jehangir, is located next to the lake. Baradari or the marble pavilion was added to the lake by Shahjahan. 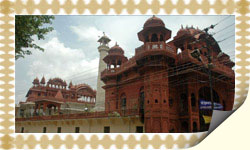 Nasiyan Jain Temple is located on Prithvi Raj Road and devoted to the first Jain Tirthankara, Rishabhdeoji. The temple is greatly revered by the Digambar sect of Jains. There is a museum alongside the temple. Jains constitute for almost 25% of Ajmer’s population, therefore, the temple attracts good crowd. Temple construction started in 1864 and opened to the public in 1895.

Mayo College :
Still counted as one of the finest public schools in India, Mayo College was built in AD 1873. The aim of the school was to provide liberal education to the young Indian princes and wards of the colonial rulers. Today, school is open for anyone who can pay the steep fee and take admissions.

Pushkar :
A large accumulation of travel attractions, Pushkar is famous for its picturesque sites as well as more than 400 temples. The most important of the temples is the Brahma Temple (only temple of Lord Brahma, the creator, in the world). Other important temples are Savitri Temple, Mahadeva Temple, Rangji Temple, and Varaha Temple. Pushkar Lake is the site of annual holy bath on Kartik Purnima. Pushkar Bazaar is famous for its high range of handicrafts. Another important attraction in the city is Man Mahal built by Raja Man Singh of Amber.

Foy Sagar :
Situated at a distance of five km from Ajmer, it was engineered by an Englishman, Mr. Foy. It is an artificial lake built as a famine relief project.

Beawar :
Located at a distance from 54 km from Ajmer. Here on the day following Holi, a Badshahi procession is taken out, and people throw gulal (coloured powder) on each other. 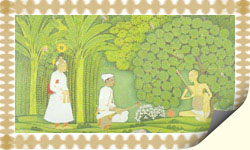 Kishangarh was a princely state ruled by the Rathores and located on National Highway 8. Apart from its fort, the Kishangarh is known for the miniature paintings style known as Kishangarh Art. Phool Mahal (Flower Palace), now converted into a hotel is the main attraction inside the fort. Kishangarh is also known its rich storehouse of marbles.

Mangliyawas :Twenty-six km away from Ajmer is the town of Mangliyawas, which is famous for the 800-year-old tree, Kalpa vriksha. On the Amavasya day of the month of Shravan (the new moon night, in the month of July/ August), the tree is worshipped by thousands of devotees. Devotees tie a thread around the tree in hope of their wishes being granted.

By Air :Sanganer Airport near Jaipur at the distance of 132 km is the nearest airport from Ajmer. There are flights to Delhi, Udaipur, Mumbai, Jodhpur, Ahmedabad, and Aurangabad from Jaipur Airport.

By Rail :Ajmer is located on the main Delhi-Jaipur-Ahmedabad-Mumbai line and accessible by a number of trains. The railway station in Ajmer is located near the dargah of Garib Nawaj. Shatabdi Express from Delhi is the fastest train that you can get for a Delhi and Jaipur connection.

By Road : Jaipur and Delhi, both of the major cities nearby are connected to Ajmer by road. It can take almost nine hours to reach Ajmer from Delhi by road.