Bhubaneswar, the capital of Orissa, is also popularly known as the “Temple City of India”. Being the seat of Tribhubaneswar or ‘Lord Lingaraj’, Bhubaneswar is an important Hindu pilgrimage centre. Hundreds of temples dot the landscape of the Old Town, which once boasted of more than 2000 temples. Bhubaneswar is the place where temple building activities of Orissan style flowered from its very inception to its fullest culmination extending over a period of over one thousand years.

Vaital Deul :
Vaital Deul (800 AD) has a double-storied wagon roof, which in turn is an influence of the Buddhist cave architecture. The interior of the temple has the image of Chamunda (an incarnation of Goddess Kali). 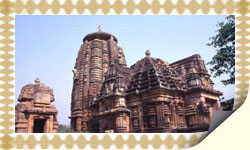 Mukteshwar Temple:
Mukteshwar Temple (7th-8th century AD) is one of the most ornated temples in the Bhubaneswar. The intricate carvings of the deities testify the influence of Hindu, Buddha, and Jain style of architecture. The carvings on the roof are specially striking.

The Rajarani Temple :
The Rajarani Temple (1100 AD), which derives its name from the stone known as the Rajarani, was built earlier in comparison to the impressive Lingaraja. Set amongst picturesque paddy fields, the relatively small Rajarani temple is noted for its fascinating female figures portrayed in a stunning variety of amorous poses and moods.

Lingaraja temple :
The 10th- or 11th-century Lingaraja temple of Bhubaneswar has been described as “the truest fusion of dream and reality.” A rare masterpiece, the Lingaraja temple has been rated one of the finest examples of purely Hindu temple in India by Ferguson, the noted art critic and historian. Every inch of the surface of the 55-m-high Lingaraja temple is covered with elaborate carvings. Sculpture and architecture fused elegantly to create a perfect harmony. Devout pilgrims, who wish to go to the Jagannath temple at Puri, must first offer worship at the Lingaraja temple. 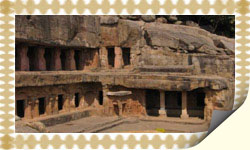 Udaygiri and Khandagiri caves :
(7 km) are two of the most important sites in the archeological history of India. There are 15 caves in the Udaygiri, out of which Hathigumpha (elephant cave) is the most important. A 117-line inscription on the walls of the cave relates the exploits of the King Kharvela who ruled Orissa from 168 to 153 AD. Khandgiri, on the other hand, gives a hilltop view of the city of Bhubaneswar, and most of the caves inside have a definite Jain influence.

Built in 3rd century BC, Dauli has Ashoka’s rock edict. It was from here that king Ashok set out to spread Buddhism. Situated here is also a white stupa (pillar) on top of a hill. It was built in collaboration with Japanese Buddhists and can be seen from miles.

Situated at a distance of 25 km from Bhubaneswar, Nandankanan has a very wide range of animals and reptiles. The main attractions include gorillas, crocodiles, and white tigers.

The Sun Temple at Konark (65 km) is a magnificent 13th-century temple visualized as the chariot of the Sun God, as he glides through the firmament from dawn to dusk. The ruins have sculptures detailing every aspect of human life. The city also has a beautiful beach.

Puri, situated at a distance of 60 km from Bhubaneswar, is a great temple town. The drive is excellent and provides a very good opportunity to view the rural Orissa.

By Air : Bhubaneswar is connected to the cities of Calcutta, Delhi, Chennai, Mumbai, Vishakhapatnam, Hyderabad, and Raipur through regular flights. Biju Patnaik Airport in Bhubaneswar is the only major airport in the state.

By Road : It is linked with Berhampur, Chilka, Cuttack, Konark, Paradip, Puri, Rourkela, Sambalpur and other places. Interstate bus services operate daily between Calcutta and Puri via Bhubaneswar and Tatanagar (Jamshedpur).