Arrive at Varanasi airport/ Railway station and transfer to hotel.

Varanasi, it is the oldest living city of the world and is famous as the city of temples. Varanasi or Kashi as it is popularly known is the most important place of pilgrimage for Hindus and the sight of devout praying standing water deep in Ganges. Buddha had reached here after he attained Nirvana to look for five Hindus Ascetics who he had met earlier before enlightenment and who had insisted that the only path to salvation was through self-mortification. Buddha gave them the precious gift of spiritual knowledge thus they became his followers and the first members of the Sangha.

In the evening tour of Ganges by boat and experience Aarti ceremony on Ghat there. Overnight stay at hotel. 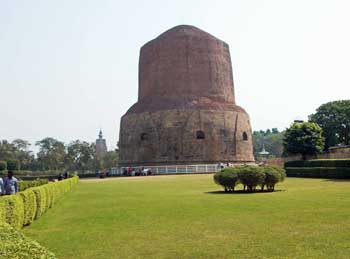 Early morning Boat tour on River Ganges to visit Bathing Ghats. We explore Ghats to witness the live rituals of the world’s most important religion. Sailing on the holy waters of Ganga, enjoy the sight of sunrise and at the background you will experience thousands of pilgrims worshipping sunrise and having a bath in the holy water.

Return to hotel for breakfast.

Later excursion to Sarnath, one of the four most important Buddhist pilgrimage tour destinations in India. Visit Dhamekh Stupa which is the most wonderful and massive structure at Sarnath. Built partly in brick and partly in stone, the Dhamekh Stupa is 28 meter in diameter at the base and 43.6 meter in height.

Return to Varanasi for overnight stay at hotel.

Morning after breakfast leave for Sravasti and on arrival check in at hotel.

Sravasti is where Buddha delivered many of his important sermons. Sravasti is the most important Buddhist pilgrimage site in the country. Lord Buddha bewildered his sermons with a million fold expression of himself, seated on a thousand-petaled lotus, as fire and water sprung from his body. Overnight stay at hotel. 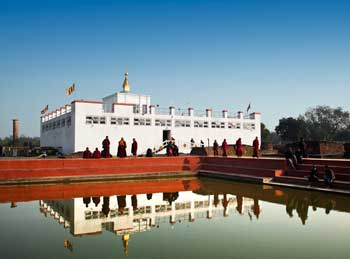 In the morning visit Saheth in Sravasti. It has a number of Buddhist Stupas and monasteries. The main attractions here are two chambers; Gandhakuti and Kosambakuti, which were used by Buddha. Gandhakuti or fragrant chamber is the most sacred place as it was used as personal chamber by Lord Buddha and devotees offer large amount of flowers to the Lord.

Then drive to Kapilvastu.

Finally, proceed to Lumbini, which is famous in the world for being the sacred site of Lord Buddha’s birth. Upon arrival, check in at hotel for overnight stay.

Later leave for Kushinagar which is also a must visit for all Buddhist Pilgrims because it was here that Lord Buddha delivered his last sermon. It was the center of the Mallas dynasty who ruled over the place, however, only few ruins remain today associated with that period. Ashoka the Great had also built many structures in this place where Buddha attained Nirvana.
Arrive and check in at hotel. 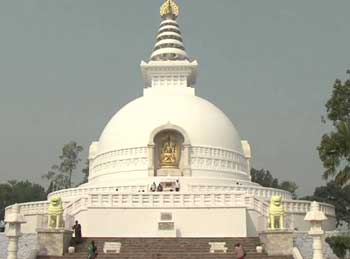 In the morning leave for Patna, en route visit Keshariya which was known as Kesaputta and was dominated by Kalamas, which was later annexed by its monarchical neighbour Kosala. Alara Kalama, the teacher of Buddha before enlightenment, is said to belong to Kesaputta. Buddha is also said to have had direct connection with Kesaputta.

Continue drive to visit Vaishali were, the lord Buddha preached his last sermon before his death in Vaishali. It is significantly associated with Buddhism. It is believed that Lord Buddha visited Vaishali many times after he attained enlightenment.

Finally, proceed to Patna. On arrival Check-In at hotel for overnight stay.

All the buildings are made with red bricks built in Kushana style of architecture. The most imposing structure is the Sariputra stupa at the extreme south of the University. There are 9 monasteries. Each monastery was provided one shrine which contained the colossal image of Buddha. The monasteries were well worked out with thick plasterwork within which there were monastic cell, a safe, a well, and drains. Also visit Museum here which possesses the treasure antiquities found during the excavations in Nalanda and Rajgir.

Continue drive to visit Rajgir which was once the ancient capital of the Magadha Kings. Buddha often visited this place, seeking the solitude and tranquillity of the Jivkamaravana monastery and preaching and meditating at the Griddhakuta hill (hill of vultures). It was also here, that his teachings were penned down for the very first time. Visit Venture’s peak where Lord Buddha set in motion His second wheel of law and preached sermons to his disciples for three months in the rainy season. The peak also houses a massive modern Stupa, the Shanti Stupa, built by the Buddhist Sangha of Japan.

Finally, proceed to Bodhgaya. The city of Bodhgaya witnessed the turning point in the life of Prince Siddhartha. From a wandering ascetic, here he attained supreme knowledge or enlightenment. Bodhgaya is the place where Buddha began his journey to spread the message of peace and nirvana. Bodh Gaya is considered the most important pilgrimage for all sects of Buddhists throughout the world. Check in at hotel for overnight stay. 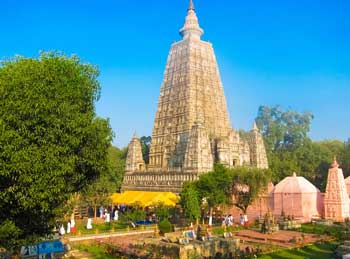 The main attraction of the temple is Bodhi Tree under which Buddha spent one week after enlightenment. The Tree is considered to be among the oldest and the most venerated tree in the world. The present tree is considered only as the descendant of the original tree. Daughter of Ashoka, Bhikkhuni Sangamitta, took a shoot of the original Bodhi tree to Sri Lanka in the 3rd century B.C. where the Lankan king Devanampiya Tissa planted it at the Mahavihara monastery in Anuradhapura where it still flourishes today.
Besides the ancient remains, there are temples or monasteries built by other Buddhist countries like Thailand, China, Sri Lanka, Japan, Korea, Nepal, Taiwan, Bhutan etc. Overnight stay.