The majestic Himalayas is known as the Dev Bhoomi, the land of the gods. The majestic Garhwal Himalayas that adorn the magnificent state of Uttaranchal, awaits and rejuvenating spiritual experience for devout. Nestling in the lofty peaks are the four most renowned pilgrimages of India.

These pilgrimages are collectively referred to as the Char Dham (or four pilgrimage centres) of Hinduism. For centuries, saints and pilgrims, in their search for the divine, have walked these mystical vales recorded in ancient Hindu scriptures.

Dedicated to Goddess Yamuna, it is perched atop a flank of the Bandar Poonchh peak and is situated opposite to Gangotri. 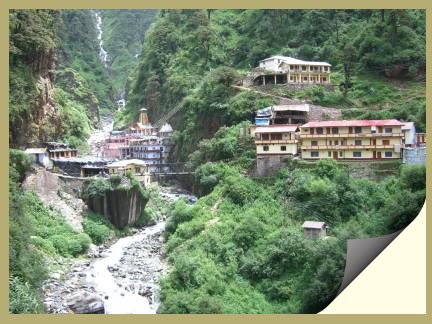 The chief attraction at Yamunotri is the temple devoted to goddess Yamuna and the holy thermal springs at Jankichatti (7 km. Away).Yamunotri finds a special mention in the Hindu mythology. The exact source of River Yamuna is the Champasar glacier on the Kalinda Parvat at an altitude of 4142mts. The temple of the Goddess Yamuna is on the bank of the river and below it are several hot water springs. A holy dip in the nearby tank filled by hot springs and cooking rice in its water are common rituals performed by the devotees.
The trek to Yamunotri offers some of the breathtaking views of the rugged Himalayan panorama. Ponies and palanquins are available for carrying the pilgrims along the entire trekking route. Souryakund and Divyashila are other nearby places where pilgrims offer prayer during their visit.

This hinterland shrine is the most sacred in the Himalayas. According to mythology, Goddess Ganga, the daughter of Heaven, manifested herself in the form of a river to absolve the sins of King Bhagirath’s predecessors after centuries of penance. Lord shiva received her into his matted locks to minimize the impact of her fall. King Bhagirath worshipped lord shiva and after long penance she flowed on to land. 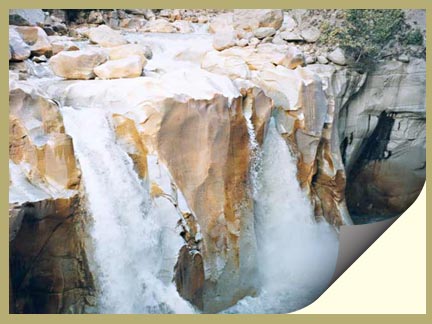 Several pilgrims trek upto the source to offer prayers either on foot or on ponies. The verdant valleys, dense forest and towering peaks offer excellent trekking and mountaineering opportunities for adventure enthusiasts.

Altitude : 3581 mts.
Climate : Winter: Sep. to Nov. cold during the day and chilly at night ,Summer:May-Aug. Cool during the day and cold night.
Clothing : Light woolen in Summer Heavy
Language : Hindi, Garhwali & English
Best Season : May to October except monsoon

One of the twelve Jyotirlings of Kedar or Lord Shiva, this is also the origin of the river Mandakini. As per the legend the pandavas sought the blessings of Lord Shiva to atone their sins after the battle of Mahabharata. Lord Shiva eluded them repeatedly and while fleeing took refuge at Kedarnath in the form of a bull. On being followed he divided into the ground leaving a hump behind. Adi Guru Shankaracharya built this temple. 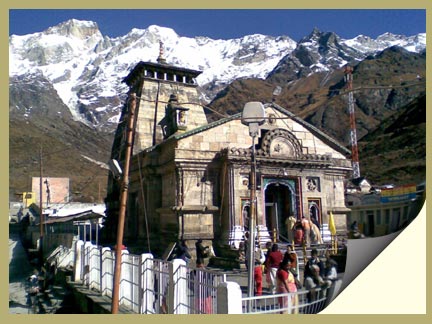 This conical protrusion is worshipped as the idol of the Shrine.The remaining portion of Lord Shiva are worshipped at four places-the arms (bahu) at Tungnath, mouth (mukha) at Rudranath, naval (nabhi) at Madmaheshwar and hair (jata) at Kalpeshwar. Together with Kedarnath, these places are known as the panch Kedar.

Between the twin ranges of Nar and Narayan lies the holy shrine, Badrinath. It is on the banks of river Alaknanda, in the backdrop of Neelkanth mountain ranges. Legend goes that river Ganga was requested to descend but the earth was unable to withstand the force of its descent, therefore the mighty river was split into twelve holy channels. Alaknanda was one of them that later became the abode of Lord Vishnu or Badrinath. The spot was carpeted with black berries, which are locally called ‘Badris’. Hence the place was called Badrivan. 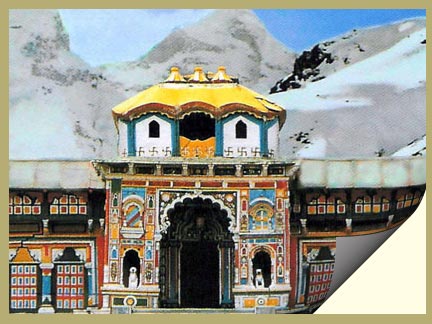 The devotees take a dip in the natural thermal springs on the banks of the Alaknanda before entering the Shrine; the hot water is said to have medicinal properties.

Altitude : Haridwar is situated at a height of almost 300 meters above sea level and the temperature.
Climate : Summer: around 40°C during day , Winter: mercury dipping to as low as 6°C.
Language : Hindi, Punjabi, Garhwali and English.
Best Season : October to March

Situated on the right bank of the Ganga, Haridwar is one of the seven sacred cities of India. Associated with both Lord Shiva and Lord Vishnu, Haridwar casts a magical spell on the visitor. It is from here that the crystal clear Ganga makes its way through the lush green hills to the plains. The breathtaking sight of a thousand twinkling diyas dancing in the holy waters during the ‘Ganga Ard’, the innumerable temples, ashrams, yoga centres. Everything adds to the charm of this oldest and holiest Indian city. 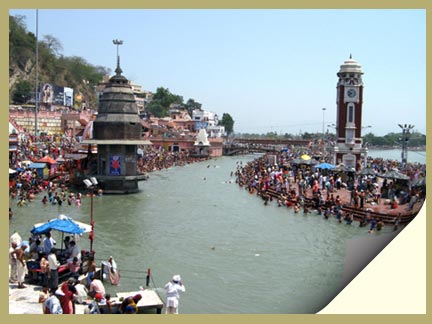 Har ki Pauri –The scared bathing ghat, which is also known as “Brahmakund”. The reflection of golden hue of floral, floating Diyas (clay lamps) in the river Ganga in the evening is the most memorable sight at Har Ki Pauri.

Chandi Devi Temple –The temple of Chandi Devi is on top of Neel Parvat which can be reach after 3 kms. trek from Chandighat and there is also a ropeway available.

Mansa Devi Temple –It is situated on top of Bilwa Parvat. The temple can be reached by ropeway or you can enjoy the journey on foot. From the top, it provides a beautiful view of the Haridwar city.

Maya Devi Temple –It is an ancient temple of Mayadevi, the Adhisthatri deity of Haridwar. It is also known as one of the Sidhapeethas of India.

Daksha Mahadev Temple –It is an ancient temple of Daksha Prajapati -father of goddes Mata Sati wife of lord Shiva. This temple is situated in South Kankhal town.

Neel Dhara Pakshi Vihar –As the name suggested it is an enchanting bird watching point, you can really enjoy here a variety of bird during the winter season.

Rishikesh, situated on the right bank of river Ganga and surrounded on three sides by Himalayan ranges, known from medieval time as celestial abode, is a great pilgrimage centre of India, attracting a large number of pilgrims. It is believed that Bharat brother of Lord Rama, subjected himself to severe penance here. A temple known as Bharat Temple was later constructed at the site and the town Rishikesh sprang up around the temple. It has since been the abode of saints and sages from where they sojourn before undertaking the arduous pilgrimage that lay ahead on the distant Himalayan peaks. 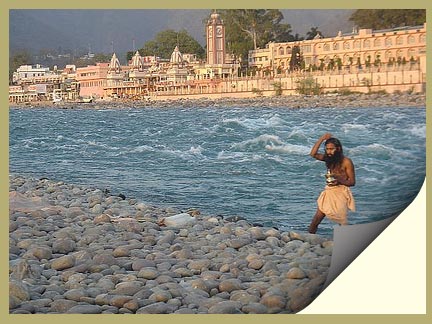 This gateway to the kingdom of Gods and pilgrimage to Badrinath, Kedarnath, Gangotri and Yamunotri is culstered with Ashram, Tourist Rest House and Dharamsalas.

The Yoga centres of Rishikesh have enchanced the significance of the place, home and foreign tourist from all over the world visit this place to have lessons in Yoga and Meditation.

Lakshman Julha –This suspended iron bridge was build in 1939 and has been a major attraction among the tourists. Ram Jhula- The other suspended Iron bridge was recently constructed between Shivanand Ashram and Sawarg Ashram.

Swarga Ashram –One can find numerous temples here. This place has the eating joints and shops where one can do shopping. The beautiful statues in the area mesmerise the visitors.

Gita Bhavan –This newly constructed building is famous for its attractive paintings and statues from the Hindu mythology. Situated just across the Lakshman Jhula.

Triveni Ghat –This is a bathing ghat. Daily in the morning and evening there are thousands who take bath here and enjoy the Maha Aarti being performed. It very soothing to sit on the banks of the river and enjoy the cool breeze from the river.

Nilkanth Mahadeo –Mythology says that in the ancient times when the ocean was being churned for ‘amrit’ (Potion for immortality), first venom oozed out. Lord Shiva drank the venom at a place which is now called Nilkanth Mahadeo. It is 12 kms from Rishikesh and is surrounded by peaceful forests.

By Air: Rishikesh does not have an airstrip of its own.
By Train : But there are trains from all the major cities in the plains.
By Road : The best transport for Rishikesh is by bus. Bus services are available from far and near places. Particularly there are regular services from Haridwar, which is just half-an- hour journey from Rishikesh.

Rishikesh does not have any big hotels in the five star category but there are other hotels which offer comfortable stay. The Ashrams also provide accommodation facility.

The climate here is continental type but its location in the foothills gives it a pleasant weather throughout the year. One can visit Rishikesh any time of the year.