Dominated by one of the mightiest forts of Asia, and steeped in historic tradition, Gwalior is an excellent entry point into India’s largest and geographically most attractive state: Madhya Pradesh.The new city of Gwalior became, over the centuries, the cradle of great dynasties and with each, the city gained new dimensions from the warrior kings, poets, musicians and saints who contributed to making it a capital renowned throughout the country and today, a modern Indian city, vibrant and bustling.

Places to Visit in Gwalior 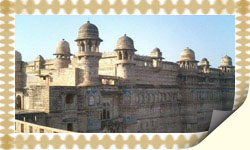 Gwalior Fort is one of India’s most famous forts. It has withstood the onslaught of many warring dynasties, each of whom have left their traces in various monuments in and around the fort. The sandstone fort, rising 300 ft. on a steep, flat topped hill, stands out in its grand isolation. As aptly described by Emperor Babur, ‘the fort of Gwalior is like a pearl in the necklace among the palaces of India.

Jain Sculptures :
The long ascent on the southern side climbs up through a ravine to the fort gate. Along the rock faces flanking this road are many Jain sculptures, some impressively big. Originally cut into the cliff faces in the mid-15th century, they were defaced by the forces of Babur in 1527 but were later repaired. 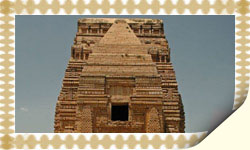 This temple probably dates from the 9th century but has been restored. Its peculiar design incorporates a Dravidian roof with Indo-Aryan decorations (the whole temple is covered with sculptures). A Garuda tops the 10m-high doorway .Here princes and princesses came to be betrothed and received education on the aspects of married life. The walls of the temple slope upward and from a ridge from which the roof rises.

Sonagiri :
60 km from Gwalior, on Jhansi Road. The 108 Jain temples date back 1,500 years, all arranged on the steps of a hill. The main temple on the top of the hill is in honour of the 8th Tirthankara. One can walk up on paved pathways to see the temples. Aarti is performed in the main temples between 6-9 pm daily.

By Air : Gwalior Airport is connected by private Airlines.

By Rail : Gwalior is on Central Railway’s main line between Delhi, Mumbai and Chennai.Taj Express and Shatabdi Express connect Gwalior with Delhi and Agra.