Haridwar is situated at the base of the Shivalik hills, where the Ganga, comes down from the mighty Himalayas meets the plains. Haridwar, literally is ‘The gateway to the Gods’. “This place is very beautiful”, at one sight one will say so and fall in love with the scenic beauty of the blend of height and plains. A Gateway to the four pilgrimage of Uttarakhand, Haridwar is also known as Gangadwar, Tapovan and Mayapuri. In its long history back to pre-historic time, the Haridwar got its name from the rishis. According to the mythology it is known as Kapilsthan. legend goes that the suryavnshi Prince Bhagirath performed penance here to salvage the souls of his ancestors who had perished due to the curse of the sage Kapila. The penance was answered and the river Ganga trickled forth from Lord Shiva’s locks and its bountiful waters revived the sixty thousand sons of King Sagara. Mythologically, drops of nectar churned out from the primordial ocean fell at the four sites of the Kumbh mela including Haridwar. The kumbha mela, happening once every 12 years and the Ardha Kumbha Mela (Coming once every six years) are big draws. One of the oldest living cities, Hairdwar has been in people’s mind from the period of Buddha to the British advent and now even is the 21st century. Besides being a religious place, it has served as the center for learning arts, science and culture. 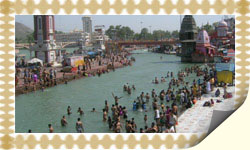 The Main ghat and is supposed to be at the precise spot where the Ganges leaves the mountains and enters the plains. Consequently, the river’s power to wash away sins at this spot is superlative and endorsed by a footprint Vishnu (God of Hindu) left in a stone here. The ghat is on the west bank of a canal through which the Ganges is diverted just to the north.

Bara Bazaar :
On the north side of the canal, between Har-Ki-Pauri and the Upper Rd, is colorful Bara Bazaar. Along with the religious paraphernalia, or prasaad (food offered to the gods, images of the deities, religious pamphlets etc) are scores of tiny stalls crammed along both sides of bazaar selling an assortment of goods including shawls, brassware, glass bangles, wooden whistels, bamboo canes and cane baskets.

Mansa Devi Temple :
Atop a hill overlooking Haridwar, this temple is dedicated to the goddess Mansa. Mansa is one of the forms of Shakti Durga who makes wishes come true. It is connected by a ropeway to the heart of town.

Gorkhnath Temple :
An imposig edifice dedicated to Guru Gorkhnath on main road leading to Har-Ki-Pauri. As might be expected in such an ancient pilgrim centre, Haridwar has temples for all devotes, all shades of religious persuasions under that great umbrella of faith called Hinduism.

Pawan Dham temple :
This temple is famed for its fantastic glass and mirrorwork, and its elaborately garbed idols.

How To Get There

By Road : Haridwar is well connected by road with all major cities in the state.