History by day. Magic by night. That’s Hyderabad, a city of smiles, of lights, of thousand faces. The capital of Andhra Pradesh – India, Hyderabad is a heady mixture of heritage, traditional hospitality and a thriving software revolution. Endearingly called ‘Pearl City’, the fifth largest city in India, is famous, the world over, for its twinkling pearls, glass embedded bangles and the delectable Hyderabadi cuisine, besides monuments of great historical interests. Located in the heart of the Deccan Plateau at 1760 ft. Above sea level.

Places to Visit in Hyderabad 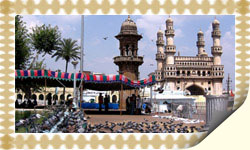 The most famous monument of Hyderabad, Charminar (180 ft. high), is located in the centre of the old city. Built in 1591 AD, by the founders of the city, as a charm to ward off a deadly epidemic raging at that time, the monument with its four intricately crafted minarets, leaves an indelible imprint ion the minds of the tourists.

Mecca Masjid :
ust a few steps from Charminar is Mecca Masjid, one of the India’s largest mosques. It is said to have bricks brought from Mecca, built into the central arch and hence the name.

Salarjung Museum :
This museum houses one of the biggest one family collection of antiques of the world. The objects d’art include Persian carpets, Mughal miniatures, Chinese Porcelain, Japanese lacquerware, famous sculptures, a superb collection of Jade, daggers belonging to Queen Nurjehan and the Emperors Jahangir and Shah Jahan, Aurangzeb’s sword and so on.

AP State Museum :
A show window and a brilliant artistic stroke exhibiting a rich culture, artistic and archaeological heritage of the region, this museum stands as an important museum of treasures.

Birla Temple :
Hyderabad of today is a veritable mix of the old and new, with sheer poetry in marble, the Birla Mandir which stands for its grand fusion of Khajuraho and Bodh Gaya of North Indian and Rajagopuram of South Indian Architecture. 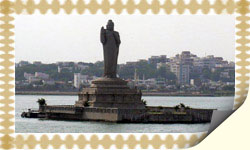 Never Losing hold of its glorious past… seducing tourists from all corners of the earth and occasionally the centre for cultural events bringing the country’s greatest artists together is Hussain Sagar popularly known as Tankbund. Built in late 16th century, it is a historic division between the charming city of Hyderabad and Secunderabad.

Golconda Fort :
Located 10 Km from Hyderabad is a massive fort of granite with the walls and ramparts extending more than 5 Km in circumference. The fort, once famous for diamonds including the Kohinoor.

Qutab Shahi Tombs :
The tombs of the legendary Qutb Shahi Kings lie to the north of Golconda, about a kilometre away from Banjara Darwaja of the Golconda Fort.

Hi-Tec City :
Moving away from the city of Hyderabad to another world, rising high to the sky, the Hyderabad Information Technology and Engineering Consultancy city with unique building of Cyber Towers promotes several world renowned software companies. The Hi – Tec City is the Cyber Capital of South India.

Ramoji Film City :
Located in the outskirts of the glorious city of Hyderabad, built in a sprawling 2000 acres of area, having picturesque locations, this filmcity is an attraction not only for film world but also to general tourists.

By Air :Hyderabad airport, at Begumpet, is within the city and has been recently upgraded and refurbished. Air India and Indian Airlines connect it to Kuwait, Sharjah, Doha, Abu Dhabi, and Muscat on the international circuit and many other International Airlines operate to Hyderabad.

By Rail :The twin cities of Hyderabad and Secunderabad are extensively covered by the railway network. Hyderabad is connected to New Delhi on the all air-conditioned and vestibuled Rajdhani Express four times a week.

By Road :On the cross roads of national highways 7 amd 9, buses of Andhra Pradesh State Transport Corporation operate to all centres of the region.