In the temple architecture of India, the Khajuraho complex remains unique. One thousand years ago, under the generous and artistic patronage of the Chandela Rajput Kings of Central India, 85 temples, magnificent in form and richly carved, came up on one site, near the village of Khajuraho. The temples of Khajuraho are India’s unique gift to the world, representing, as they do, a paean to life, to love, to joy; perfect in execution and sublime in expression. The Khajuraho temples were built in the short span of a hundred years, from 950 – 1050 AD in truly inspired burst of creativity. Of the original temples, 22 have survived till today to constitute one of the world’s great artistic wonders. The creators of Khajuraho claimed descent from the moon and the legend behind the founding of this great dynasty and the temples is a fascinating one.

Places To Visit in Khajuraho 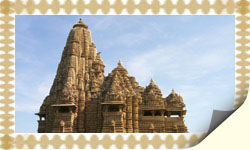 Kandariya Mahadeo :
The largest, most typical Khajuraho temple, it soars 31 m high. Dedicated to Shiva, the sanctum sanctorum enshrines a lingam.
Chitragupta Temple :
Facing eastwards to the rising sun, the temple is dedicated to the sungod, Surya. The image of the deity in the inner sanctum is particularly imposing: five feet high and driving a horse – drawn chariot.

Vishwanath Temple :
A three – headed image of Brahma is enshrined in this temple.

Lakshmana Temple :
The lintel over the entrance of this beautiful Vaishnavite temple shows the trinity of Brahma, Vishnu and Shiva with Lakshmi, Vishnu’s consort.

Matangeswara Temple :
Still a living place of worship, the temple is dedicated to Shiva, has an eight feet – high lingam, and is outside the precincts of the Western Group. 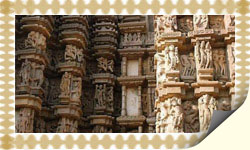 Parsvanth Temple :
The group’s largest Jain temple and exquisite in detail. The sculptures on the northern outer wall are particularly noteworthy.

Adinath Temple :
Dedicated to the Jain saint, Adinath, the temple is lavishly embellished with sculpted figures, including yakshis.

Duladeo Temple :
Dedicated to Shiva, the apsara and ornamented figures ate the temple’s most striking features.

Chaturbhuj Temple :
This temple has a massive, intricately – carved image of Vishnu in the sanctum.

By Rail :The nearest rail heads are Harpalpur (94 Km) and Mahoba (61Km). Jhansi (172 Km) is a convenient rail head for those travelling from Delhi and Chennai, Satna (117 Km), on the Mumbai – Allahabad line of the Central Railway for those coming from Mumbai, Kolkata and Varanasi.

By Road : Khajuraho is connected by regular buses with Satna, Harpalpur, Jhansi and Mahoba.