Start visit of Delhi which is the capital city of India and has served as the capital city to many ruling dynasties of India. The city shows a perfect amalgamation of past and present. Delhi is symbolized as chaotic embroidery of primitive establishments, Mughal tombs, dusty bazaars and colonial architecture. Today, we shall visit Old Delhi to witness the grandeur of the Mughal Empire, the majestic Red Fort which served as the capital and center of operations for the Mughal emperor Shah Jahan for two centuries. This majestic monument is now used as a platform by the Prime minister of India to address the people of the republic on the eve of Independence Day. Later enjoy a rickshaw ride through the intricate alleys of Chandni Chowk. After a joyful ride, we stop at Jama Masjid which is the oldest and one of Asia’s largest mosques. It was built by Shah Jahan in the year 1656. Then we visit Humayun’s Tomb. It was the first garden tomb of Indian subcontinent. The tomb of Humayun was built by his widow, Biga Begum (Hajji Begum) in 1569-70, 14 years after his death, at the cost of 1.5 million rupees. It has inspired several major architectural innovations, culminating in construction of Taj Mahal. Return to hotel for overnight stay.

After breakfast, get ready for a long drive to Agra which is not only known for Taj Mahal, one of the Seven Wonders of the World but has also played a significant role in shaping India history. On the way to hotel, glance at the beautiful Taj Mahal and upon arrival at hotel check-in for overnight stay.

After breakfast, leave for city tour of Agra, once the capital of Mughal India and centre of great power and glory. Visit world famous “Taj Mahal”, the monument of love immortalized in marble. It was built by Emperor Shah Jahan in the memory of his Queen Mumtaj. While the arch-and-dome profile of clean white marble has become iconic, the beauty of Taj Mahal lies in its details: inlaid semi-precious stones and Koranic verse in calligraphy create an enchanting interior space.

Then visit Agra Fort which was built by Emperor Akbar. He was undoubtedly the Greatest Mughal Emperor of India. The construction of Agra fort commenced in the 1565 and completed in 1571. Built with red sandstone, Agra Fort is a mixture of the Islamic and Hindu styles of architecture. Next we visit Sikandra, the tomb of the great Mughal emperor Akbar. The construction is a mixture of many architectural styles and completely different from earlier Mughal Buildings. Afternoon visit Itmad-ud-Daulah. It is a tomb built with white marble in the typical Islamic style architecture. It was built by the Mughal Empress Noor Jahan in the memory of her father. Overnight stay.

In the morning, we will visit Fatehpur Sikri on our way to Jaipur. Fatehpur Sikri is, undoubtedly, one of the best preserved Mughal Palace cities in India.

The city was built by Great Mughal Emperor, Akbar, around 1570, by employing some of the most renowned craftsmen of the time and using highest quality material. However, the city suffered a tragic fate as it had to be abandoned forty years later due to failure of the water systems.

Then proceed to Abhaneri, a small Indian village which has one of India’s deepest and largest step wells (also known as tank gardens). Step wells are unique to India. They were used for preserving water to cope with the seasonal availability of water in India. They served as a place for social gatherings as predominantly women came to collect water from them and were worshipped on religious occasions for sustaining the villages.

Continue drive to Jaipur. Upon arrival and check in at hotel for overnight stay.

After breakfast, we leave for morning excursion to Amer Fort. The Amer Fort in Jaipur was built with red sandstone and white marble which makes it a stunning sight. Ascend the Fort in unique style on elephant back. Although the outer appearance of the fort is rough and craggy, the interior presents a completely different picture with numerous beautiful and intricate carvings. The mirrors in the fort reflect the water in the lake – creating a wonderful sight. The Fort also has remnants of its rich past and the oldest of ruins dating back to the 16th century.

In the afternoon, we will conduct the city tour of Jaipur where we visit the City Palace and museums. The Palace houses a prestigious collection of different types of Rajasthani Dresses. The museum contains a fascinating armoury of Rajput weapons; swords of all shapes and sizes, with chased handles, some of them inlaid and encrusted with jewels and encased in bold and magnificent scabbards. Near the city palace is the ornate Hawa Mahal (Palace of winds), our next destination.

Hawa Mahal is five stories high and its windows are decorated with delicate screens carved in stone. These allowed royal ladies to view the city and bazaar without being seen from below. Also visit Jantar Mantar, magnificent stone observatory built in 1728. The observatory has large scietific instrument, interestingly built in brick and mortar, including a very accurate 90 feet sundial. The afternoon is kept free for you to explore the local Bazaar or relax at the hotel. Overnight stay.

Transfer to Airport to catch flight for Varanasi. Arrival at Varanasi and transfer to hotel. Varanasi is most important place of pilgrimage for Hindus and the sight of devout praying standing water deep in Ganges. Afternoon, tour of Ganges by boat and experience Aarti ceremony on ghat there. Return to hotel for overnight stay.

Early Morning boat cruise on the river Ganges to visit Bathing Ghats. See Varanasi come alive along the banks of the river and people bathing in the holy water and worshiping the rising sun. Witness the conclusion of life at the riverbank holy cremation grounds. Return to hotel for breakfast. Later, city tour of Varanasi visiting various temples. Afternoon excursion to Sarnath. It was here that the Lord Buddha delivered his first sermon and set in motion the wheel of law of buddhist faith. Overnight stay. 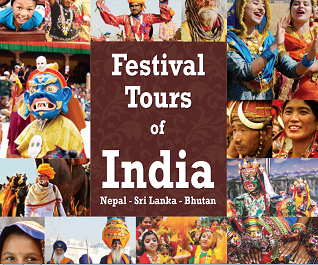