Mumbai, formerly known as Bombay, is the capital of the Indian state of Maharashtra. Of the four great cities of India, Mumbai is the most cosmopolitan, spearheading India’s move into the 21st Century. The word Mumbai is derived from Mumbadevi, the patron goddess of the Koli fisher folk, the oldest inhabitants of Mumbai. Mumbai is also the country’s financial powerhouse, the nation’s industrial heartland, and its economic nerve centre. It is also the seat of the glamourous world of Bollywood Cinema. 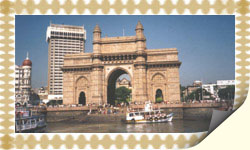 Mumbai’s most famous landmark, The Gateway of India, is situated at Apollo Bunder. It was designed by George Wikket. It was built to commemorate the visit of King George V and Queen Mary to India in 1911. Through this magnificent monument, numerous viceroys and governors were welcomed to India as they disembarked from their steamers, hence the name.

Flora Fountain (Hutatma Chowk) :
This marvellous fountain was built in 1869, in honor of Sir Henry Bartle and Edward Frere. It is situated in the heart of the Mumbai city at a junction of five streets. The fountain has a figure of “Flora”, the Roman Goddess of Flowers at the top.

Chowpatty Beach & Juhu Beach :
Chowpatty beach is situated on Marine Drive. This beach is well-known for it’s stalls selling “Bhel-Puri and Pani -Puri chat” a favourite fast food among the Mumbaites and visitors to the city. Juhu Beach is the most popular beach in Mumbai which is 30 kms away from the heart of Mumbai. It is a long stretch of sandy beach from Santacruz to Vile-Parle. This is a very popular beach for picnic. Both these beaches are crowded on week-ends.

Haji Ali :
Haji Ali mosque, and the tomb of a Muslim saint, is located off shore, in the Arabian sea opposite Mahalaxmi temple. During high tide the walkway to the mosque is submerged in the sea and it can be visited only during low tide.

Kamala Nehru Park & Hanging Gardens :
The giant Old woman’s shoe in the Kamala Nehru Park is very popular with children to play in. One gets a panoramic view of parts of the city from these parks situated at the height of Malabar Hill. When seen at night, the view of street lights of Marine Drive resemble a dazzling bejewelled “Queen’s Necklace”. At sunset, the waterfall and fountains in the park are lit with colorful lights which are worth seeing. The Hanging Gardens surrounded by beautiful flower beds and lush green lawns are very popular as picnic spots.

Mahalaxmi Temple :
This temple is situated very close to the sea off Mahalaxmi. This temple has three beautiful images of Hindu goddesses, Mahalaksmi, Mahasaraswati and Mahakali which are made of gold. During Navaratri festival, devoted Hindus throng this temple in great numbers to offer coconut, flowers and sweets to the goddesses.

Mount Mary Church :
This is one of most prominent and splendid churches in Mumbai, situated in Bandra (West). During the month of September a week long fair is held which is attended by the people of all relegions.

Mahalaxmi Race Course :
Situated in Mahalaxmi, this racecourse is one of the best in the world. The racing season is for six months from October to April. It attracts huge crowds for heavy betting. 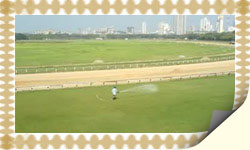 This Sience Centre is named after Pandit Jawaharlal Nehru, India’s first Prime-Minister. It is situated in Worli. It has a computer laboratory, mobile science exhibition units, a heritage hall, an auditorium, inflatable dome planetarium, science library and a children’s science park. The sky-show at the planetarium is very interesting with it’s narration, sound effects and slide projections which combines entertainment with education. It has a library containing a large collection of books on astronomy, astrophysics and space sciences.

The Prince of Wales Museum :
This museum stands not too far from the Gateway of India. It has a priceless collection of art, sculpture, china and other antics. Carefully presereved, this mid-Victorian Gothic style building built in 1904 with beautiful gardens surrounding it, is worth visiting in Mumbai.

Taraporewala Aquarium :
Situated on the Marine Drive, this aquarium has fish in varying shapes, sizes and colour. It’s a delight for children as well as grown-ups.

Victoria Gardens (Veermata Jeejabai Bhonsle Udyan) :
These botanical and zoological gardens have an interesting collection of flora and fauna. Apart from these, it also has a beautiful gateway, an arched architctural screen and a museum building in the Greco-Roman Style. A large stone elephant at the entrance is also worth seeing. These gardens are situated in Byculla.

By Air :Mumbai’s International Airport is at Sahar (30 kms) and Domestic Airport at Santacruz, 26 km. Most of the International Airlines, Indian Airlines & many other private airlines touch Mumbaiand connect it with the major cities of India and the world.

By Rail : Mumbai’s the headquarters for both western & Central Railways. Regular train services connect Mumbai with all major towns and cities in India.

By Road : Mumbai is connected by good motorable road to: