Religion and philosophy is essential part of life for most of people in India. Even though, the manifestation of spirituality and philosophy is often diffused as there have been a number of schools and cults which have been rigid in their thoughts and interpretation of philosophical terms in order to maintain their importance and relevance.The epics of “Ramayana” and “Mahabharata” have played a great role in the life of Hindus which is the main religion in the country. Besides Hinduism, Islam, Buddhism, Chistianity, Jainism and Judaism are other important religions which have many followers in India. 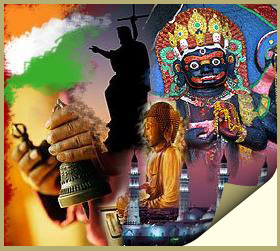 What is Hinduism? It is not just a religion, but is is a philosophy and way of life for more than 80% population in India who are Hindus. Hinduism is different from other major religions in the world as unlike those, it does not originate from a holy book or teachings of a prophet. The Hinduism came to India in 2000 BC when early Aryans had settled here and is one of the oldest known organized religions and third largest in the world today. Hinduism is a mix of ideas and beliefs which have been spread through written sculptures known as Vedas and Upnishads dating back between 1400 and 400 B.C. The essence of Hindu faith is embodied in the 8Bhagavad Gita: “He who considers this (self) as a slayer or he who thinks that this (self) is slain, neither knows the Truth. For it does not slay, nor is it slain. This (self) is unborn, eternal, changeless, and ancient, it is never destroyed even when the body is destroyed.”

Islam first came to south India through Arab traders in the seventh century. Later it was Afghans and the Moghuls who brought Islam to north India. Today there are 14.2% Muslims in India as per 2011 census which is the latest conducted by Govt. of India. Although Muslims are only a small percentage in India but it is the second largest Muslim country in the world. 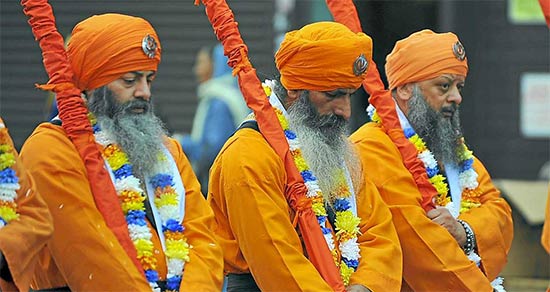 Sikhs form part of about 2% population in India and they are in majority in Punjab, a state located in north west India. There are about 27 million Sikhs in entire world and about 83% live in India. Rest of the sikh population has migrated to countries all over the world predominantly to English speaking countries mainly England and Canada. Sikhs can be easily recognized by their turbans and beards. The Sikh religion was founded more than 500 years ago by Guru Nanak Dev when India was going through conflicts between Hindus and Muslims in this region. The word “Sikh” means disciple in Punjabi and all Sikhs are considered to be disciples of God who follow the teaching of ten Sikh Gurus. The wisdom of these teachings are recorded in Guru Granth Sahib which is a pious holy book for all Sikhs.

Although Christianity is not a major religion in terms of number of its followers in India but it had reached the country not long after Christ’s own lifetime, with the arrival of St. Thomas, the Apostle.

The Syrian Christian Church in Kerala in south India finds its roots to the visit of St. Thomas. With the arrival of St. Francis Xavier in 1542, the Roman Catholic faith was established in India after St. Franis Xavier came to India in 1542. Today, about 2% people in India are Christians.

Buddhism is one of the most important religions in the world.

Buddhism was founded in 6th century B.C. by Siddartha Gautam, a prince who renounced the world and gained enlightenment after wandering and meditating for six years to become Lord Buddha. The philosophy of Buddhism is based on teachings of Lord Buddha.Buddhism which follows the middle path. Buddhism teaches to purify and trains oneself to perform good and wholesome actions.

The aim of all this is to get rid of sufferings of cyclic birth and death.

After originating in India, Buddhism spread throughout the Central Asia, Sri Lanka, Tibet, Southeast Asia, as well as the East Asian countries of China, Mongolia, Korea, Japan and Vietnam. It is strange that Buddhism could not flourish in India for long as in the 8th century the revival of Hinduism brought back the glorious days of Hinduism and attracted people incline towards Hinduism again.

Jainism is another important and sixth largest religion in India.

There are About 4 million Jains. They are mainly in western India in states of Rajasthan, Gujrat and Maharashtra. Although Jains are less than 1% of population in India but they are very well known as community of traders and rich merchants. The Jain religion was founded by Vardhamana Mahavira who was born in a royal family in today’s Bihar. At early age of only 30 years, Mahavira renounced royal life and devoted his life to the task of finding out the reason for existence. He attained enlightenment at the age of 42 and spent rest of his life in preaching his philosophy which is known as Jainism.The Jain religion believes in absolute nonviolence (ahimsa) against all living beings. It is evident from the Jain monks and nuns wearing face masks to avoid inhaling small organisms and it is essential that all practicing Jains remain vegetarians if they follow the true spirit of Jainism.

Jewish contact with India is quite old and dates back to 973 B.C when King Solomon’s merchant fleet came to Malabar Coast in Kerala and began trading for spices and other fabled treasures. It is said that the Jews first settled in Cranganore, soon after the Babylonian conquest of Judea in 586 BC..