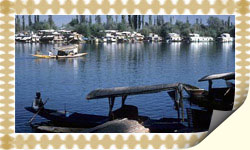 Dal Lake :
The Dal is famous not only for its beauty, but for its vibrance, because it sustains within its periphery, a life that is unique anywhere in the world. The houseboat and Shikara communities have lived for centuries on the Dal, and so complete is their infrastructure on the lake, that they never have to step on land! Doctors, tailors, bakers- one can see them all in tiny wooden shops on the lake, near picturesque vegetable gardens and acres of lotus gardens.

Nagin Lake :
Nagin Lake, which is usually thought of as a separate lake, is also divided from Dal Lake only by a causeway. The causeways are mostly suitable for walkers and bicycles only so they make a very pleasant way of seeing the lake without having to worry about traffic or Shikaras. The main causeway across the lake carries the water pipeline for Srinagar’s mains water supply.

Mughal Gardens :
Kashmir was a favourite of the Mughal emperors who visited it as often as they could. Cool and refreshing after the plains of North India where the business of governance kept them, they planted gardens with stepped terraces and flowing watercourses. Cheshma Shahi is the first Mughal garden one will pass after Nehru Park. Built at a height above the city, its views are as stupendous as its layout. The next garden along the road that encircles the Dal is the Nishat, built by empress Nur Jahan’s brother Asaf Khan. The third Mughal garden – the Shalimar – was planted by Jehangir, the Mughal emperor, whose love for Kashmir was legendary.

Hazaratbal Mosque :
Across the Dal from Shalimar is the mosque of Hazratbal, the only one of its kind architecturally in Kashmir. Made of white marble with a dome and a minaret, Hazratbal is the repository of a single hair of the Prophet Mohammed, exhibited to the public on certain days of the year. 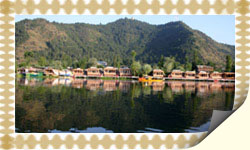 Shankaracharya Hill :
Within Srinagar, on its highest hill is the Shankaracharya temple, nearly one thousand feet above the city. It is devoted to Lord Shiva. The site dates back to 2,500 BC. The philosopher Shankaracharya stayed at this site when he visited Kashmir ten centuries ago to revive “Sanatan Dharma”.

Hari Parbat Fort :
The 18th century fort tops the Sharika Hill, which is clearly visible, rising to the west of Dal Lake. The fort was constructed by Atta Mohammed Khan from 1776 but the surrounding wall is much older, it was built between 1592 and 1598 during the rule of Akbar.

Charar-E-Sharif :
Situated on the road to Yusmarg, this is the site of the shrine or Ziarat of Sheik Noor-ud-Din, the patron saint of Kashmir. The valley also has the Ziarats of a number of his followers.

Yusmarg :
Standing in the Pir Panjal hills, out beyond the airport, at an altitude of 2,700 metres, the meadow of Yusmarg is reputed to have the best spring flowers in Kashmir. The beautiful valley is at the foot of the Sangisafaid valley on the northern slopes of the Pir Panjal range.

Dachigam National Park :
This wildlife reserve was, at one time, the royal game reserve but animals within its boundaries are now completely protected. There are said to be Panther, Bear and Deer, besides other smaller animals, in the reserve. There is a good chance of seeing the endangered Hangul, Langur Monkeys and perhaps other species.

Gandarbal :
Just beyond the Wular and Manasbal lakes turn off from the Leh road, this pleasant little town marks the point where the icy Sindh River leaves the mountains and enters the plains. Gandarbal is the official headquarters of the Sindh valley and was originally called “Doderhom”.

Wular Lake :
Wullar Lake is the largest fresh-water lake in India is 60-km from Srinagar. Spreading over a 125-km area, the lake, by drawing off excess water from the Jhelum, acts as a natural flood reservoir. Interesting ruins in the centre of the lake are the remains of an island created by King Zain-ul-Abidin.

By Air :Various airlines fly to Srinagar from New Delhi, Chandigarh, Amritsar, Jammu and there are flights operating from Srinagar to Leh and back. Flights are more frequent during the summer Tourist Season; at that time there will probably be several flights a day between Delhi and Srinagar. Some services are direct, while others operate via Chandigarh, Amritsar or Jammu. Flight time duration from Delhi on the direct flights is about an hour and ten minutes.

By Rail : Srinagar’s railhead is Jammu, which in turn is connected to all parts of the country, including Delhi, Kolkata, Pune, Mumbai and Kanyakumari. The distance is about 876-km from Delhi to Srinagar although almost everybody coming up from Delhi, or other Indian cities, by land will come through Jammu from where the buses run daily to Srinagar.

By Road :Srinagar is connected by an all weather road to Jammu, which in turn is connected to many parts of North India. One can catch buses from Delhi but people making the trip by road should take up the route via Chandigarh, Amritsar or from the Himachal Pradesh hill stations.