Located around the shimmering clear blue water lakes, Udaipur has a distinct identity of being a romantic city. The city not only offers a wide range of tourist attractions, but it is also shopper’s paradise. The terrain of the hills and ravines of Aravallis give the city a totally distinct charm that separates it from any other destination in India. 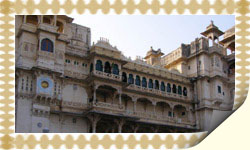 The fascinating beauty of this magnificent Grand Palace surprises everyone. It is a majestic sheer white royal building surrounded by crenellated walls. The entrance into the palace is through ‘ Elephant Gate’ The various attractions of the palaces include triple gate, arches, courtyards, overlapping pavilions, terraces, corridors and hanging gardens.

Lake Palace :
The beauty of Lake palace surpasses the imagination of everyone. It is located on the Lake Pichola and its murmuring and lapping waves make the whole atmosphere absolutely pleasant. While standing at the palace, now converted into a luxury hotel, one can feel the cool breeze caressing body. It showcases the luxury that Maharajas of yesteryears used to have. 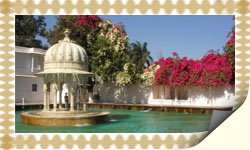 Saheliyon-Ki-Bari or ‘Garden of the Maids of Honor’ in English is a beautiful garden in the town. Once it used to be a rarefied place where royal ladies used to come for a stroll. The garden is well laid, with extensive lawns and shady walks. Its manicured lawns display a fascinating variety of bougan villea and five fountains release showers in tune with their titles namely, ‘Welcome’; ‘Raining Cats and Dogs’; ‘Rains in Midnight’, ‘Rains without Clouds’; ‘Gentle Shower in Mid Day’.

Lake Fateh Sagar :
It lies to north of Pichola and was built by Maharana Jai Singh but it got the name of Fateh Singh who rebuilt its dam. Both the lakes are breathtakingly beautiful and one can take a cruise on their waters. The Sunset over these lakes are moments to be cherished.

Jagdish Temple :
Dedicated to Vishnu, this temple was built in 1651 by Maharana Jagat Singh, it is located at about 150 metres north of the entrance to the city palace. The temple is designed in Indo-Aryan style and is the largest and most beautiful temple of Udaipur. A brass image of Garuda lies in front of the temple.

Eklingji (22 km) :
The complex of 108 beautifully sculpted temples dedicated to Lord Shiva, built in 734 AD. At Nagda, which lies, just 2 km away are the 10 th century richly carved Sas-Bahu temples, and the splendid Jain temple of Adbudji.

Nathdwara ( 48 kms north) :
with its temple of Shrinathji (Lord Krishna) is a renowned pilgrim centre. It is said that in 1691, while the statue of Shrinath (Krishna) was being moved from Mathura to escape an attack by the fanatical Aurangzeb, the wheels of the carriage carrying the statue got stuck in the mud. Taking this as a divine message that Lord Krishna wanted to make that his abode, a temple was built there and the town grew around it. In the colourful bazaar outside the temple you can find some of Nathdwara’s famed Pichhawai cloth paintings.

Jaisamand Lake & Wildlife Sanctuary :
lie some 48 km southeast of Udaipur. The exceptionally picturesque area around one of Asia’s largest man-made lakes, built in the 17 th century, with palaces, temples, graceful cenotaphs and marble steps leading down to the water, makes a pleasant getaway. 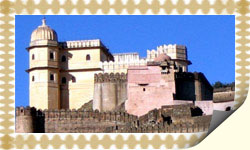 is the most spectacular of the 32 forts built by Rana Kumbha. Lying on top of the Aravalli range at 1100 m, it fell only once in its history. Its ramparts run for 4 km along the Aravalli hills.

Some 90 km north of Udaipur, in a peaceful valley, is Ranakpur, one of the five main pilgrim centres for the Jains. The main shrine in the 500-year old temple complex (preserved in near perfect condition) is the huge Chaumukha Temple dedicated to Adinath, the first Jain saint. It is the largest and most complex Jain temple in India with 29 halls and 80 domes supported by 1444 ornately carved pillars, no two pillars alike. There are two other Jain temples in the complex, and, some distance away, a Sun temple

Kankroli :
on the banks of the Rajasamand Lake, 65 km from Udaipur, is the site of a Vaishnava temple of Dwarkadhish and a beautiful Jain temple built by Dayal Shah, which has some intricate marble carvings.

By Rail :Udaipur is well connected by train to Delhi, Jaipur and Ahmedabad .

By Bus :There are many deluxe buses operating from Udaipur to Jaipur, Ajmer, Kota, Bundi, Jodhpur and Chittorgarh.