Varanasi is the amongst the oldest living cities in the world, it is also the holiest of Hindu pilgrimages. It is so old that it is a part of Indian mythology and finds mention in the epics Ramayana and Mahabharta. Through the ages Varanasi was also known variously as Avimuktaka, Anandakanana, Mahasmasana, Surandhana, Brahma Vardha, Sudarshana, Ramya and Kasi – the city of light. Nearly 5,000 years ago, Kasikanda described the glory of the city in 15,000 verses in the Skanda Purana. 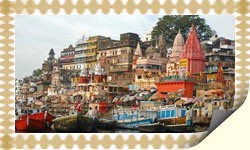 Kashi Vishwanth Temple :
Varanasi is the city of a thousand temples. The main object of all devotees is the Kasi Vishwanath Temple built for the presiding deity of Varanasi. The Emperor Aurangzeb who built the Gyanvapi Mosque on its site destroyed the temple in 1669.
Annapurana Temple :
Close to this shrine is a temple to Sanichar (Saturn) where offerings are made to appease the deity in times of trouble, and the Annapurana Temple dedicated to the goddess of anna or grain.

Tulsi Manas Temple :
This temple is a modern structure in marble is dedicated to Lord Rama. The temple is located on the site where Tulsidas lived and composed his Ram Charit Manas.

The Sankar Mochan Temple :
This temple is dedicated to Lord Hanuman and is very popular with the local citizens. New Vishwanath Temple : This is located in the campus of the Benares Hindu University.

Bharatmata Temple :
It is an unusual shrine for it is dedicated to Mother India and has a large relief map of India and carved in marble within.
Other places of interest in Varnasi include the Alamgir Mosque built by the Emperor Aurangzeb above the Panchganga Ghat in the 17th century. The great mosque of Aurangzeb – the Gyanvapi Mosque is a magnificent structure with all minarets.
Today the Benares Hindu University is perhaps the largest residential university in Asia with 32 area of study. The university is noted for its studies in Sanskrit and in Indian culture, including art and music and attracts students from India and abroad.

The Bharat Kala Bhawan Museum :
on the campus of the Benares Hindu University is noted for its splendid collections of sculpture and terracotta from places like Mathura, Sarnath, Khajuraho, miniature paintings and manuscripts.

The Fort Museum :
at Ramnagar Fort has displays of arms, costumes, palanquins and royal memorabilia.

The ABC Gallery :
located near the Tulsi Manas Mandir has an exhibition of contemporary art.

By Air :Well connected by air to other major cities. The airport at Babatpur is 22 km from the city.

By Road : A major railway junction on the Northern and North – Eastern Railways, Varanasi is linked to major cities all over India.

By Rail : Varanasi is well connected by road to major cities in UP and Bihar and is located on three National Highways – NH2 from Kolkata to Delhi, NH7 to Kanyakumari and NH29 to Gorakhpur.